Negotiation Skills in the VUCA World 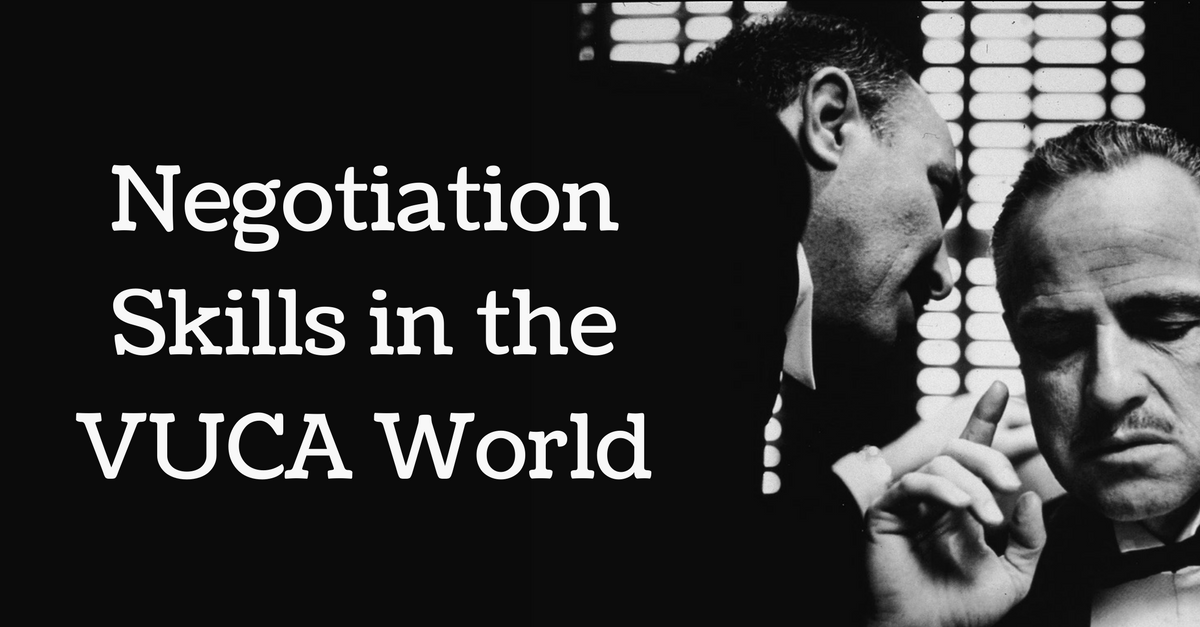 Only half way through the year, yet 2017 has witnessed an unprecedented increase in the number of mergers and acquisitions. Be it with the bank consolidation process encouraged by the government or the mergers in the telecom sector. We are rapidly moving towards an era where companies are no longer limited to functioning within their boundaries. Be it through such mergers and acquisitions or traditional partnerships, organizations today are looking to expand their reach in the market by pooling their efforts to make the most of the available opportunities.

Although the idea seems full of potential advantages on paper, it is fraught with challenges when it comes to application. The process of partnering or merging with another organization is complex and layered. The hours of negotiations are just the tip of the iceberg in so far as the complexity is concerned. As can be expected, the process does not always lead to the expected results.

Let’s take Chaitanya’s example. Chaitanya and his colleagues had started their technology company in the year 2000. With the expansion of the IT sector in India, their ‘start-up’ did not take long to start turning profits. Chaitanya along with his team worked day and night to take their company to a level where they could partner with the best from all over the world. Sure enough, they got an offer from Tekram, a Taiwan based company. It was the opportunity they had been waiting for.

The negotiations were as heated as expected. Chaitanya wanted to prove his company’s expertise, to position it in the best light possible and have the upper hand.

After nearly 2 hours into the meeting, Chaitanya noticed that the Tekram representative had made a mistake, a calculation error. Without a second thought, he jumped on it. Questioning Tekram’s expertise and superiority in the field, Chaitanya pressured the company into getting his way. With no other alternative available, Tekram had to accept his demands and strike the deal.

Chaitanya felt victorious. 11 years of hard work had finally paid off. He and his team had been waiting for this day, and it showed in the celebrations that ensued. However, the taste of sweet victory turned sour very quickly. Problems and obstacles kept coming up and the progress of the deal kept halting.

It did not take Chaitanya much time to understand that the point of contact for him at Tekram was the same person who had made the mistake during the negotiation meeting: who he had humiliated to get his own way. Eventually, the work completely halted with no active decision being taken on the deal. Tekram kept focusing on operational flaws in Chaitanya’s company rather than focusing on the strategic issues at hand.

Chaitanya spent most of his time attempting to fix any and every issue that was brought up. However, after an entire year of back and forth, the deal was called off.

In today’s VUCA world, leaders are expected to be agile, result oriented and competitive. It is viewed as something that is not only desirable but as a must if the organization is to succeed. However, what this example shows us, that with organizations moving towards partnerships and mergers, there is also a need for a collaborative mindset. This implies that a leader today is expected to embody two opposing traits; collaboration and competition at the same time.

Chaitanya here displayed high levels of competitiveness, a typical win-lose attitude. What was required however was collaboration, a win-win mindset.

This brings out two major areas of focus for leaders today. A leader first and foremost needs to understand himself, his preferred style or orientation. A competitive leader or a cooperative/collaborative leader needs to first become aware of his style and its strengths and development areas. S/he then needs to be able to build on these development areas in order to know when and how to flexibly move into and out of these opposing dimensions of collaboration and competition as required by the situation.

The best way to equip a leader to do this is by focusing on his/her emotional maturity. Looking back at Chaitanya, we can see that his approach to the negotiation was heavily biased by his desire to partner with a multinational company. This was what he and his team had been working for. This might have worked as a bias preventing him from seeing the bigger picture, and work with the win-win mentality.

He was also unable to display empathy during the negotiation process, unable to discern the emotions displayed by the negotiating party representing Tekram. Had these biases not played such a key role in Chaitanya’s behavior he might have been able to negotiate much more effectively.

This example only highlights one of the many challenges leaders face in the VUCA world today. Leaders are constantly expected to display many opposing competencies based on situational requirements. Though not a new concept, emotional intelligence serves as one of the only ways to equip a leader to do so.