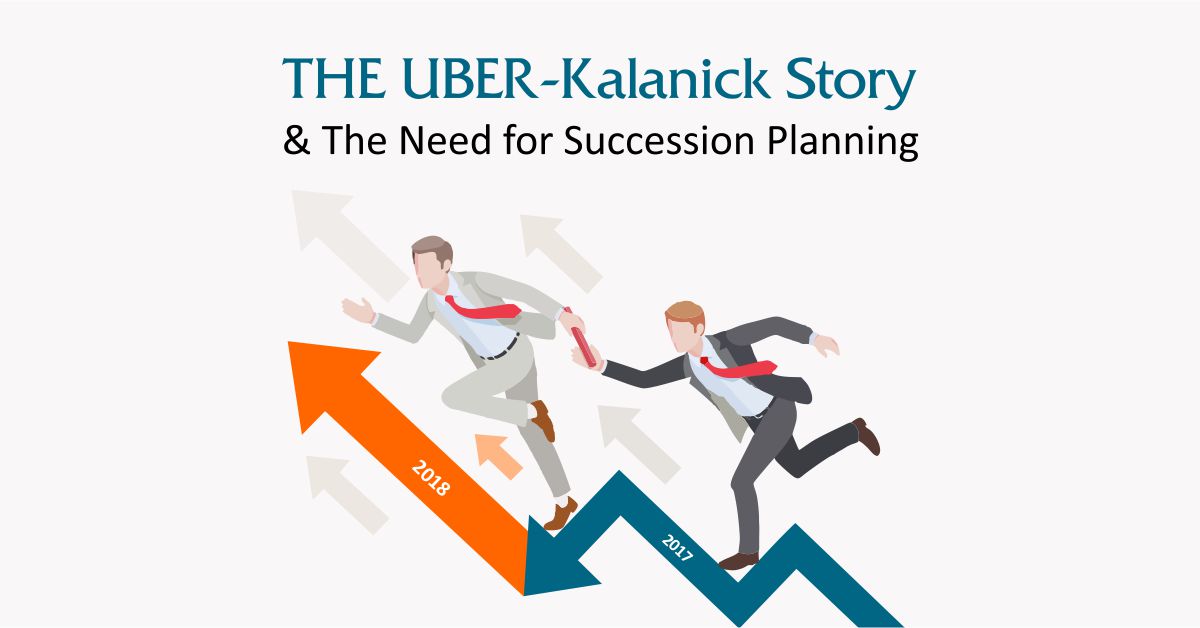 On 20th June 2017, Travis Kalanick resigned as CEO of Uber after months of chaos and confusion. The decision was received with a mixed response from various quarters. With the sexual harassment controversy and the ongoing legal battle with Google, many felt that this may not have been the best time to resign, rendering Uber leaderless at a time of intense need almost a crisis. At the same time, others appreciated the strong decisive stance taken by the Uber board, showing a strong commitment towards change for the better.

Regardless of whether the decision to quit was right or wrong, what one needs to think about is the ‘what now?’. The resignation does not change the current scenario. Uber is still battling a rather sensational legal battle, and at the same time is battling to rectify a culture of sexism.

How can the company progress without having a strong and charismatic leader/leaders at its helm? The question we are trying to address here is that of succession planning. Especially since sudden departures of high profile and critical managers is not uncommon in current times, and when it does happen, it leaves a chasm that is not easy to fill.

History is filled with examples of company growth suffering due to the lack of this preparedness. Be it the retirement of Steve Ballmer in 2014, the controversial and overnight TATA ouster or the resignation of Travis Kalanick this year, there has been a period of uncertainty that has followed in these organisations and has veered them even if temporarily from their paths of growth and glory.

“It’s a bad idea to announce someone’s retirement and not name a replacement. It’s equally bad when companies announce a new CEO and then delay the effective date for months.”

In either of the cases, it is the employees who are worst affected. There is confusion among all levels of employees about the direction, reporting relationships, about decision making etc., and there is a definite drop in employee morale.

An HBR article suggests that each year 10-15% of companies need to appoint a new CEO. This becomes especially alarming when research also suggests that only 54% of boards were investing in grooming a specific successor, and 395 had no viable candidates for immediate replacement (Heidrick & Struggles, 2010). There are however several companies that are learning and are making deliberate efforts towards setting up a succession planning process in place. For instance, IBM is known for planning ahead and focussing on development. The maturity and integration of their talent management process were most visible during the transition of their exiting CEO Samuel Pamisano and their entering CEO Ginni Rometty. What leads to this success? What are the factors that lead to successful succession management? An IBM Whitepaper lists the following principles:

1.) A clear purpose provides a focus for talent optimisation: to manage the leadership talent pool, or to generate a pipeline for key positions etc.

2.) Readiness levels guide the scope of the approach: assessing the readiness of key stakeholders for succession planning initiative.

5.) Clear evaluation categories: successful plans need to identify key roles as well as the readiness of potential candidates placed into the categories

7.) Technology is a critical enabler: with increased focus on analytics and data-driven talent management, software has become the way forward in succession management

Succession planning for some may simply be the process of replacing outgoing employees, and for some, it may be a necessity (as in the case of Uber). In this VUCA world, however, it is ever more important to view succession planning from a broader perspective, as a way to ensure the continuity of key leadership positions, to develop internal talent, and to ensure stability of the bench strength of key personnel, ensuring consistent and improved organisational performance