Multitasking OR the Myth that it is 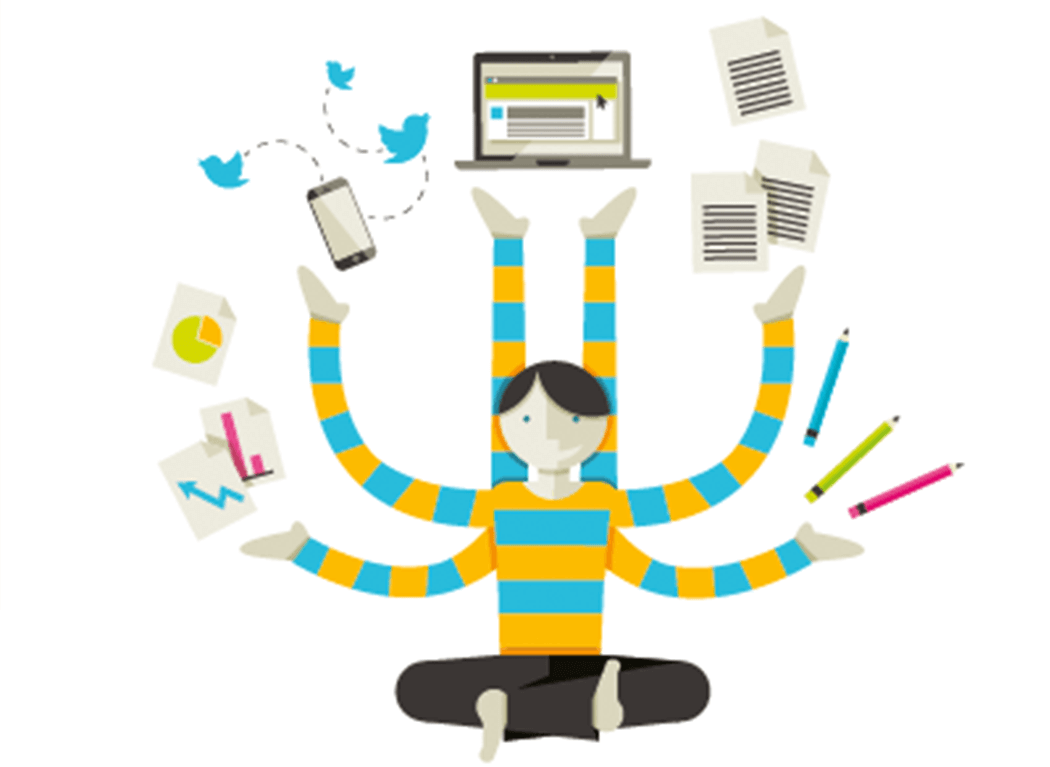 Ever find yourself juggling too many things at the same time?
Ever get exhausted, and it’s not 11AM yet?
Ever look at something but can’t recall when you did it?
Ever have to rework something you spent time on?
Heard someone ask you to pay attention to them?
Find yourself reaching for that cup of coffee to often – and you don’t even like it?
If you said a yes to any of those, chances are you’re struggling with juggling and living the myth that’s multi-tasking.

In the super-fast age that we’re living in, where everything is instant – instant coffee, instant food, instant gratification and Instagram, the demand on us to do more in the same (if not shorter) period of time is mind-bogglingly high. So we try to do two – or one too many – things at the same time.

How is that working out for you?
In the words that follow, let’s try and understand the myth that is multi-tasking and the reality associated with it. To do this, let’s first understand how the brain works.

Whenever you need to pay attention, an area toward the front of the brain called the prefrontal cortex springs to action. This area, which spans the left and right sides of the brain, is part of the brain’s motivational system. It also helps to focus your attention on a goal and coordinates messages with other brain systems to carry out the task.

While the right and left sides of the prefrontal cortex work together when focused on a single task, the sides work independently when people attempt to perform two tasks at once. It has been scientifically demonstrated that the brain cannot effectively or efficiently switch between tasks, so you actually lose time.

Scientists at the Institute National de la Santé et de la Recherche Médicale (INSERM) in Paris discovered this when they asked study participants to complete two tasks at the same time while undergoing functional magnetic resonance imaging (fMRI). When the scientists told the group they would receive a larger reward for accurately completing one of the two tasks, they found that nerve cell activity increased in only one side of the prefrontal cortex. However, when the greater reward was associated with the other task, the other side became more active. The findings suggest that when there are two concurrent goals, the brain divides in half, says INSERM neuroscientist Etienne Koechlin, who led the study.

When the scientists asked the study participants to attempt yet another task, they found that the participants regularly forgot one of the three tasks they were asked to perform. The participants also made three times as many errors as they had made when attempting only two tasks. Koechlin says the study demonstrates that while we can readily switch between two tasks, we “might be in great trouble when we try to juggle more than two tasks, simply because we have only two frontal lobes.” When you’re focused, both the left and right sides of the prefrontal cortex work in tandem. But when you multitask, they attempt to work independently. Even though it feels like you’re doing two things simultaneously, you’re actually switching between the two sides of your prefrontal cortex. This switch takes a fraction of a second, but those microseconds add up: it actually takes you up to 40% longer to complete the same tasks than if you were to tackle them separately.

The impact of trying to multi-task

MIT neuroscientist Earl Miller notes that our brains are “not wired to multitask well… when people think they’re multitasking, they’re actually just switching from one task to another very rapidly. And every time they do, there’s a cognitive cost.” The simultaneous processing of tasks requiring attention is very tough on the brain. When we multitask, the brain is forced to switch its focus back and forth between activities, leading to confusion, errors, etc. Multi-tasking has small, but incremental – and not positive impact on our brain, in the way we function, and – often – our lives

Research tells us the it takes four times longer to recognize new things so when we multi-task, we’re not saving time; we’re actually using up more!

When we complete a tiny task (sending an email, answering a text message, posting a tweet), we experience a dopamine rush, our reward hormone. This instant gratification encourages us to keep switching between small mini-tasks.

This creates a dangerous feedback loop that makes us feel like we’re accomplishing a ton, when we’re really not doing much at all (or at least nothing requiring much critical thinking).

Also, our prefrontal cortex craves novelty. New stimuli cause a surge of endogenous opioids to the reward-seeking parts of the brain. It feels good to indulge in distractions

How can we get more done?

Given the demands of being in this age, there is a greater need for focus and good quality deliverables – some merit to getting things right the first time! Here are some things you may want to explore. These will help you not fall into the trap that’s multi-tasking and yet be able to deliver quality in the same 24 hours available to everyone.

If this interested you and you’d like to know more about how you can be more productive in your daily life – AND how you can align your tasks and time to the way your brain works, please reach out to us.