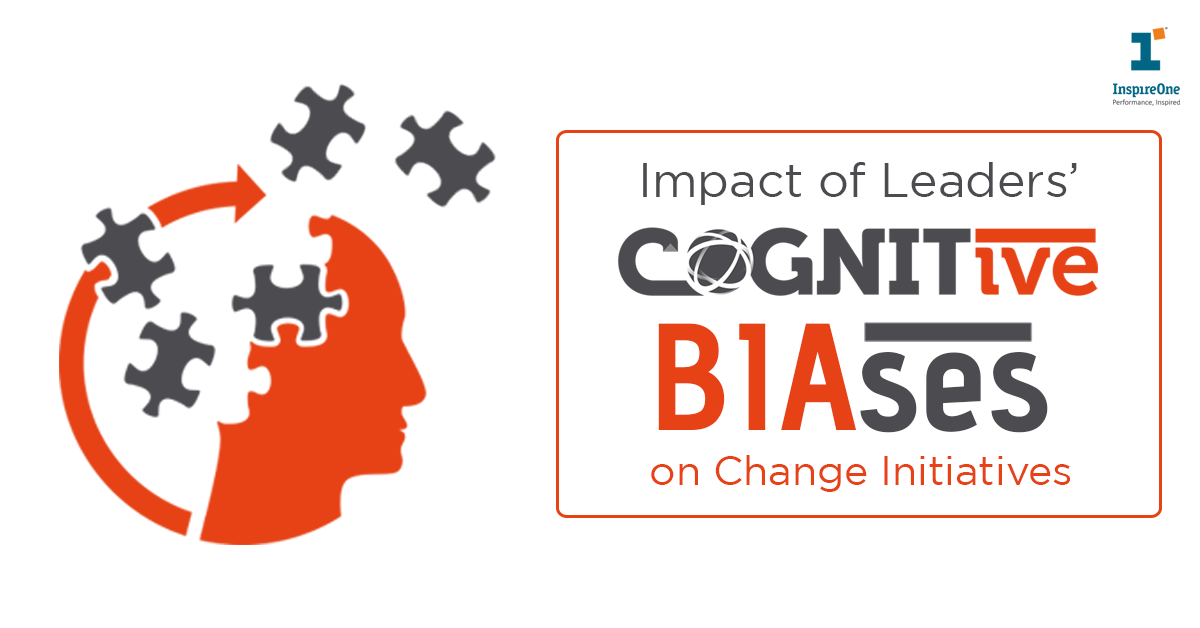 Heraclitus, a Greek philosopher, is quoted as saying “change is the only constant in life”. He lived in Ephesus, near modern Kusadasi, Turkey, around 500 B.C.

We in the corporate universe, have heard this one as “The only constant is change”.

This quote has certainly been a constant in terms of its relevance across centuries!

In the corporate world what also has been a constant is the struggle to bring about successful change or transformation. According to Bain and Company, only 12% companies are successful in achieving their stated transformation results, 20% fail completely and the remaining 68% settle for less than 100% of their stated results.

Working with organisations on their transformation goals, for the last 2 decades, we have realized that:

So, what do these cognitive error or biases mean. “The failure to think clearly, is what experts call a cognitive error, it is a systematic deviation from logic – from optimal, rational, reasonable thought and behavior”. By systematic what is meant is that these are not occasional errors in judgement, but rather routine mistakes, barriers to logic we stumble over time and again, repeating patterns just not through our lifetimes but also generations.

This blog attempts to explore 3 cognitive biases of leaders and leadership teams, which have a direct impact on transformation goals.

The change/transformation even relevant: This question is often the victim of a bias called the “social error”, which dictates that individuals (read leaders) and therefore organisations feel they are behaving correctly when they act the same as other people / leaders / organisations. In other words the more people display a certain behavior or undertaking, the more appropriate this is judged to be. Very often at the cost of the actual relevance and accuracy for ourselves and their organisations.

For instance, there are “flavors of the year” for change initiatives – “agility, flexibility, learning organisations, innovative organisations, design thinking approach, et. al.” have all made their appearance on the stage of corporate change. Many organisations have embarked on these, just because these have been on the world stage.  These have been likely failed initiatives if their relevance to the organisation was not compelling. And if these had been taken on as part of the “social error” bias.

If we look at Newton’s first law of motion as the reason for change – “A body remains at rest or in motion with a constant velocity unless an external force acts on the body.”

It is critical for leaders therefore, to ensure that the external force being considered is not due to a social error but is attributed to an actual customer need (the organisation’s customers) that they believe they are or can be better placed to service than the competition is. Any change that is guided by this external factor is relevant others are not.

The confirmation bias is alive and thriving in the business world. One example: an executive leadership team or leader decides on a new change strategy. The team / leader enthusiastically celebrates any sign that the strategy is a success, while indications to the contrary remain unseen or are quickly dismissed as exceptions.

If transformation strategies have to be successful, then leaders while celebrating successes must contribute time and attention to “dis-confirming evidence” and not be blind to it. Any evidence of things not being as pet their belief and view and expectations must be evaluated. That will be authentic leadership in the true sense.

For leaders this irrational behavior especially comes into play because of a need for consistency. Consistency signifies credibility. If a leader decides to cancel a project hallway through, they may create a contradiction. They may have to admit that they were wrong!

In fact, one of the greatest consequences of the sunk cost fallacy is when the boards of organisations allow a leader, unsuitable to lead the required change, to lead the change, simply because he is the leader at that time and money and time has been invested in him/her.

The board and the leader must have the courage of conviction to steer away from the sunk cost fallacy and take decisions to abandon change strategies or leaders that don’t work in the interest of the change goals, irrespective of the past investment.

This blog only covers the three significant cognitive biases/errors of leaders that may impact change initiatives. There are many others that maybe relevant and in play. The next blog in the series will cover three more. However, more than the actual biases, what is more important is to build the awareness, narratives and conversations about the role that a leader’s or a leadership team’s biases play in the failure of change initiatives. Often, just identifying these biases and dealing with them at appropriate times would help create success. The question – “what cognitive bias maybe in play?” – should be a significant review question for all change initiatives.