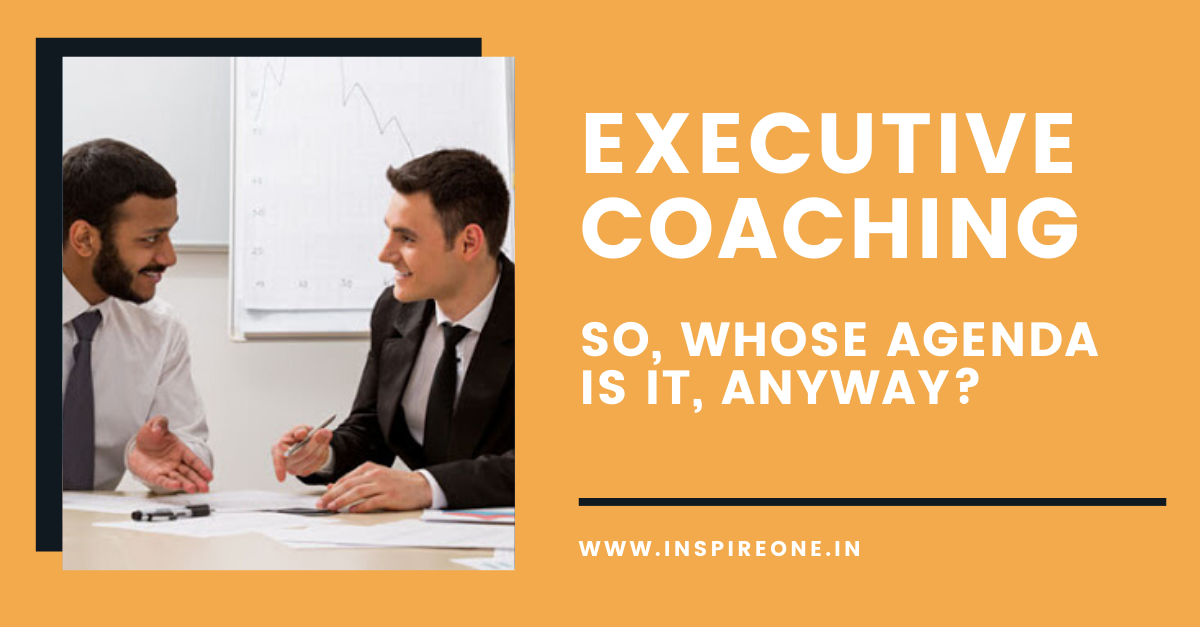 The answer to this question, fundamentally, decides the success or failure of an executive coaching engagement. The possible answers are tough, specially where an organisation is sponsoring the coaching for a leader / manager / individual contributor.

It could therefore be the manager’s agenda, based on their view about what their team member needs to correct or develop on, to be more effective. This in some cases could be with the manager’s biased view or the quality of the relationship between the two.

Nothing wrong with either of the options for the executive coaching agenda. But the engagement is misguided and set up for failure, if the agenda is limited to the 2 options given above. Which unfortunately, is often the case.

In our experience of coaching engagements across industries and levels, success has only come if the participant directly identifies with the “gain” they will get or the “pain” they will be able to alleviate from the engagement.

Organisations and coaches have “aligning the participant to the development objective” as the first step of the engagement. The right step but in most cases may end up being a tick in the box step depending upon whether the buy in is “real” vs “cognitive”.

What then is the most appropriate agenda and whose should it be?

According the International Coach Federation (ICF), the leading body in coaching certification and Gold standards in executive coaching:

Essentially saying that agenda must be identified, driven, and measured by the person to be coached. The coach can only facilitate the process. The organisation can provide opportunity for it.

A coaching engagement with a Centre head of a global logistics company brought to the fore how critical it is for the participant to lead the agenda.

The participant had done exceptionally well in the past 2 years in terms of the growth strategy of the India Center. Had grown the center from 11 people to 1700 people. Set up the infrastructure, processes, people and built the client relations. No mean task by any standard.

The manager was appreciative of the achievement and efforts but felt that the participant should now move to the “next level”, think strategically, be able to create long term plans and not stay entrenched in the day to day operations. That he said was the agenda of the executive coaching engagement.

On interacting with the participant, the coach discovered that he was happy with what he had achieved, was appreciative of his manager. He was also very averse to conflict and valued good relationships. He heard the agenda spelt out by his manager and agreed immediately saying, “if that’s what my manager wants let’s do it.”

That should have rung the warning bells. But it was received as “great alignment between the manager and the participant.”

The coaching sessions began with “clear alignment on the agenda”, but that unraveled very soon. The cracks emerged in the form of:

On the other hand, the participant being conflict averse could never raise these questions with his manager.

In effect the agenda was not truly bought in or aligned.

What finally emerged as the agenda was to enable the participant to voice his views and questions with confidence, to be able to handle conflict, to create a working relationship with his manager which was functional, constructive, and transparent. That was the agenda that created value for the participant in his overall effectiveness of his role, in being able to establish realistic expectations with the manager and ensure the manager’s support to perform his role.

Lesson to be learnt by the triad of the manager, participant and the coach.